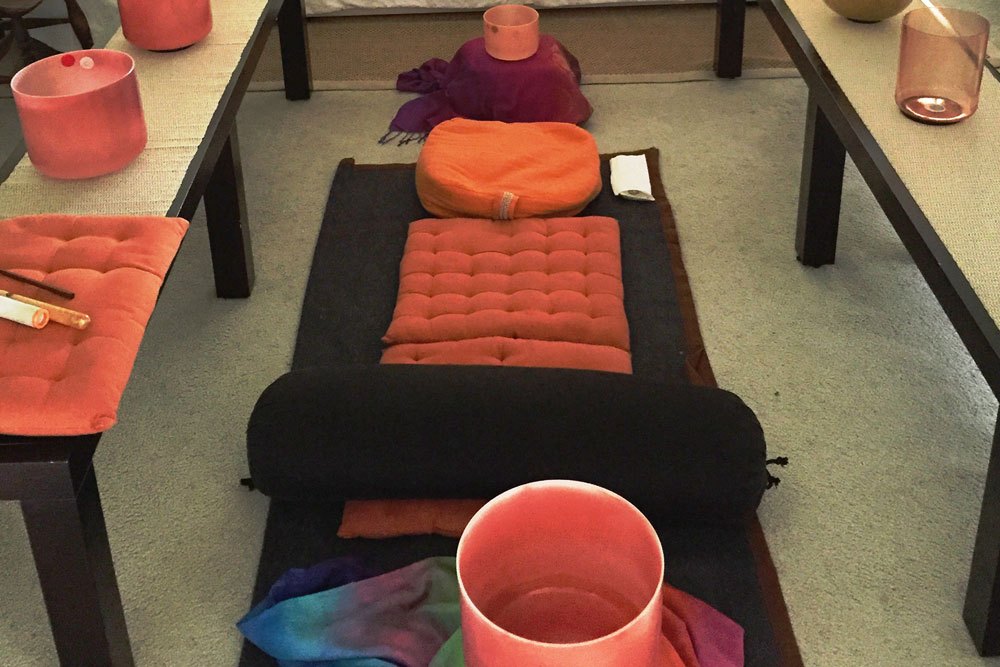 How many times have we stopped and listened to sounds and music that touched our hearts and stirred our imaginings? Have you noticed how certain sounds resonate in ways that heal and create feelings of wellbeing and harmony? Sound healing is a form of vibrational healing which works on the energy system of the body in ways similar to Homoeopathy, Crystal Healing, Reiki and Bach flower remedies to name a few.

Knowledge of healing with soundcomes to us through sacred and mystical texts and healing traditions from diverse societies and cultures around the world. Today continued honouring of the ancient wisdom combined with exploration of the new technical and sacred sciences has seen an emergence of understanding in the ways sound can be used as a powerful tool for transformation.

Using sound vibrations of the voice, the internal pulse and rhythm of the body, drums, quartz crystal 'singing' bowls, didgeridoo, gong, tuning forks, Tibetan and Japanese metal 'singing' bowls, cello, angel chime, vibraphone, monochord, double bass, and acoustic guitar are some of the tools currently being used by therapists to transform and heal the body.

New partnerships are also being formed between ancient mysticism and modern science in the application of sacred sound and one of these has seen the emergence of the quartz crystal 'singing' bowl. These beautiful frosted and clear bowls are similar to the Tibetan metal bowls and are played in a similar way. Both types of bowls emit the most amazing healing vibrations.

The crystal 'singing' bowl is made of quartz and the effect upon the body and consciousness of the individual is tremendous. The electrical aspect of the quartz emanations precipitates strong responses within the crystalline structures and patterns of the human body. We resonate strongly with quartz energy.

Produced by the computer industry, the quartz crystal bowl is used as a medium of intense energy to grow silicon quartz chips, which are used as an integral part - the heart - of our communication network. Aside from the technological function, the crystal bowls are powerful tools for inner communication. The crystal bowl is both a symbol and a tool of the alchemical process; a linking of ancient wisdom and new high technology creating a bridge from the past to the future.

The sound emitted by playing the crystal bowls as musical instruments has been called the "purest tone" in the world. The vibrational frequencies of the bowls resonate with the physical body and the subtle energy field facilitating the harmonising of the heart and the mind, the physical with the spiritual.  The sound induces altered states of consciousness and the body vibrates to a more refined level.

Dina lives in Israel where she is a teacher of Feldenkrist and is visiting Sydney for several months. She has had 5 years of intensive therapy which she said had been "very effective to a point and then I felt stuck. I felt I released a lot of emotional stuff but for some reason my health has deteriorated."

Dina was very fatigued and mentally exhausted when we first met. She had been doing so much talking over the years she just didn't want to do it anymore. However, she did want to reach some deep-rooted conflict, which she had been unable to reach through verbal dialogue and conventional methods. We both felt that some of the emotions released in previous therapy had become stuck in her physical body.

She has had several crystal bowl sound healing sessions now and during each sound experience crystals, selected by Dina, would be laid on her body after a gentle aromatherapy massage. Dina continued to nurture herself in between sessions and has felt the benefit from having warm baths with sea salt and essential oils every day.

"My crystal bowl sound sessions reached very deep layers, clearing things which I did not really fully understand nor did I feel I needed to understand - it was just happening," Dina explained. "I feel lighter, more peaceful and my mind is quieter, not racing all the time and I am more relaxed."

Dina went on to say "I had excruciating pain in my knees . . . now I can walk much easier and my energy levels have increased tremendously."

"My heart felt dead before, now I have sensations around the heart and I smile most of the time. I feel as if channels that were blocked in my body are opening and life is flowing inside me much more easily. The crystal bowl sound has shifted my consciousness and I feel I've taken a quantum leap forward. I cannot explain how the crystal bowls have worked but I just started to feel better."

Dina has said that after our last session she woke feeling very tired and decided to rest and returned to bed with a book and the heart shaped rose quartz crystal acquired at our session. Dina became aware that as she held the crystal in her hand, she intuitively moved it in a clockwise motion over her heart. Story after story she read from the book. The stories were moving but were not sad, however she found herself crying non-stop. As she let the tears fall, she was aware that she was feeling more, her heart was opening further, healing was continuing and she felt more deeply engaged with life. The crystal sounds continue to resonate in the body's cavities which act as echo chambers long after the playing of the bowls has ceased.

Some people have stated that they can 'hear' and feel the vibrational overtones of the quartz crystal bowls up to a week after they've been played. Any environment where there is a constant flow or gathering of people benefit greatly from the clearing and uplifting affect of the quartz crystal bowls. The difference in energy is palpable and research has shown that the structure of this very pure waveform, which is a sine wave, is audible tested up to half a kilometre.

Trevor who is in his early 40s has had Sensory Radicular Neuropathy all of his life and he became aware of it 13 years ago. It's a disorder of the nervous systems, which affects the muscles and sensory organs and is related to the family of motor neurone disorders. Trevor came to a series of crystal 'singing' bowl sound sessions where he chose crystals to place on his body, expressed his feelings through drawing and received Reiki healing simultaneously.

Trevor felt skeptical that anything would change but decided to come for the sound experience anyway. He walked with artificial leg braces and had limited movement of his hands and fingers. He occasionally experienced prolonged periods of pain in his extremities.

Trevor came for 7 healing sessions and we focussed on a different energy centre (chakra) each week. Trevor said, "I felt vibrations through my body and I was amazed, I had not had any feeling from the knees and elbows to my extremities for over 9 years."

Trevor stated, "If I can feel it in my legs I wonder what other results could be achieved. I felt a glimmer of hope. If I can feel this now what else could happen?"

After one sound session Trevor said, "I thought maybe my nervous system isn't dead after all. There maybe something I can still work with. I felt vibrations and sensations in my body and extremities that I wasn't able to before. I felt hope that I could do something to change my condition whereas before I believed that my condition was irreversible".

"The crystal bowl sound healing sessions were a turning point for me. If I could feel again in my legs, I believe I could find other avenues that could also help me. This has led me to pursue other paths of energy healing,"

Trevor said, "I remember the healing session where we focussed on the solar plexus was particularly important for me. My consciousness shifted and I realised I had given the power of my health and my life to others. The crystal 'singing' bowl sound sessions opened my eyes to the possibility of change. I understand now how necessary it was for me to become empowered and to accept I have the power to heal myself."

Trevor has recently thrown away his leg supports and his hands continue to become stronger. "I work with a combined program of vibrational healing and physical exercise now. The quartz crystal 'singing' bowl sound sessions acted as a catalyst for me to claim my personal power back. I have activated the healing process of my mind, my body and my spirit."

Healing with Sound touches a part of us that feels very familiar. We feel very connected to sound and to music - it has become an integral part of our lives. Sacred sound whether music, song, prayer, chants, toning, incantations or affirmations is vital to the creation process and has been considered a direct link between humanity and the gods. It has been considered the oldest form of healing.

Today Sound Healing is available to us in many beautiful different forms. As a beautiful, vibrational healing modality it supports our transformation at every level of our beings. Choosing which one feels right for you is easy - follow your heart, you know what's best for you.